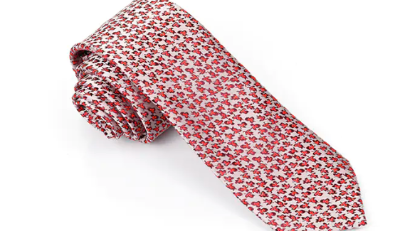 Men's necktie can be called a display of masculinity. A perfect necktie can instantly enhance the temperament of men. People often see pictures above the chest at a glance, and the necktie between the neck can give people a good impression. The following are some of the precautions for a necktie and some of the ways to play neckties ~

The necktie is a natural match for relatives and friends of shirts. It can not only enrich the sense of layering but also enhance the tone and overall style. It is a must-have item for high-quality men. To improve the modification effect of the necktie to a full score, mastering the corresponding necktie style is like the finishing touch, which is a basic skill to enhance the style of life. Common play methods include the Prince Albert method (few steps, and will not fill the neckline with too large bow tie, causing a bloated and airtight visual impression), Windsor knot (the method is more cumbersome, but the advantage is that it can be used. Freely control the shape and size of the necktie knot, so that the space of the neckline is filled, creating a capable and straightforward elite style), romantic knot (necktie knot is well-proportioned, necktie line is straight and beautiful, easy to leave a neat and rigorous good impression).